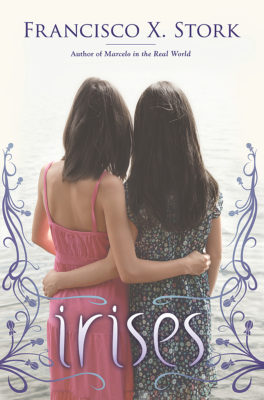 TWO SISTERS: Kate is bound for Stanford and an M.D. -- if her family will let her go. Mary wants only to stay home and paint. When their loving but repressive father dies, they must figure out how to support themselves and their mother, who is in a permanent vegetative state, and how to get along in all their uneasy sisterhood.

THREE YOUNG MEN: Then three men sway their lives: Kate's boyfriend Simon offers to marry her, providing much-needed stability. Mary is drawn to Marcos, though she fears his violent past. And Andy tempts Kate with more than romance, recognizing her ambition because it matches his own.

ONE AGONIZING CHOICE: Kate and Mary each find new possibilities and darknesses in their sudden freedom. But it's Mama's life that might divide them for good -- the question of *if* she lives, and what's worth living for.

Irises is Francisco X. Stork's most provocative and courageous novel yet.

--- - ! "“Hello? Hello?”
\tKate hesitated. She could hang up now and go back home. Home. Home was a mother who was dying but never died, a sister who couldn't live alone. Home was the place that gripped you by the ankles whenever you tried to make something of yourself. “Hello,” she said tentatively. There was something about taking that first step that gave her strength.
\t“Who's this?\"
\t\"It's me.\"
\t“Kate? Is everything okay?”
\t“Remember when you told me I could call you day or night?”
\t“You sound like you're in trouble. Where are you?”
\tShe took a deep breath. She knew what she was doing and had no doubts. She wanted to make sure she didn't sound as if she did. “Did you mean it?”"