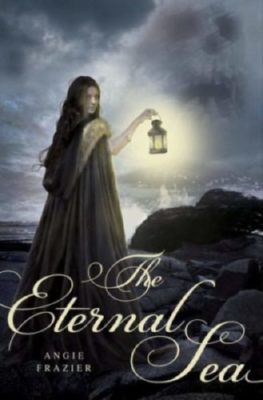 After the thrilling journey that led Camille through the dangerous discovery of love, secrets, and a magical stone that grants immortality, Camille has everything she wants. She's escaped the men who wanted her dead, and now she is ready to build a new life with Oscar, her one true love. But things are not to be so simple. Oscar is acting strangely, and before they can even board a ship from Australia back home, to San Francisco, Camille learns that the journey is not over. If she does not follow the magic of the curse of Umandu, her life and Oscar's could be in grave danger.
Angie Frazier

Angie Frazier is the author of the YA novels EVERLATING and THE ETERNAL SEA, as well as the middle grade novel THE MIDNIGHT TUNNEL. She lives in Southern New Hampshire with her husband and three daughters. Visit her online at www.angiefrazier.com

Camille froze midstep, stunned by the sudden sight of him. The gentle slope of his broad shoulders, the lean cut of his waist, his grown-out, dark blond hair. Oscar Kildare came down off the last step and fixed her with an unreadable stare. It had been two full weeks since she'd last seen him. Camille wanted to go to him, burrow deep into his arms and kiss him as much as she wanted to shout at him to leave. But she knew her anger would not win out. Because try as she might, Camille could not look at Oscar without seeing him as he'd been the morning she'd finally found the magical stone—vacant-eyed and ashy-ipped, in a pool of his own blood. Dead.

Oscar reached into his trouser pocket and took out a small, string-tied leather pouch. Without a word, he set it on the arm of the horsehair sofa. The contents settled with a metallic, chiming noise. Coins?

"What is this?" Camille looked from the pouch to Oscar. It was then that she noticed the bag in his other hand. It was the burlap bag she had so carefully hidden away in the closet upstairs in her mother's room. Inside it was the stone of the immortals. Umandu. How had Oscar known where to find it?

"What are you doing with that?" she asked. She hadn't touched or even looked at the stone since the moment she'd found it. As soon as she'd laid her hands on it, the stone had read her heart's desire. It had determined who Camille most wanted alive again. And her heart had left her father behind.