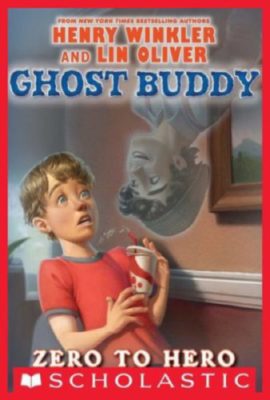 A hilarious new series from Henry Winkler & Lin Oliver, authors of the bestselling HANK ZIPZER books!Billy Broccoli is new to the neighborhood, and wants cool friends and a spot on the baseball team more than anything. But the one thing he never wanted is his own personal ghost. So imagine his surprise when he ends up sharing a room with Hoover Porterhouse, a funny ghost with a whole lot of attitude.When an obnoxious school bully sets out to demolish Billy, the Hoove comes up with a plan for revenge. It's all in the Hoove's Rule Number Forty-Two: Stay cool. And like it or not, Billy and the Hoove have to stick together if Billy ever wants to get in style, get even, and conquer the school.
Lin Oliver

Suddenly, without warning, Billy''s entire baseball jersey flew out of the closet and floated across the room, the red and white sleeves fluttering in the darkness. The jersey came to a stop in front of the mirror on the back of his door. Billy became aware of a strange whirring next to his bed. He whipped around and saw that the numbers on his digital alarm clock were going haywire, spinning like crazy, racing forward and backward like some unknown force was controlling them.

Impulsively, Billy grabbed the clock and threw it at the jersey, which was still twisting itself this way and that, looking at its reflection in the mirror. Unfortunately, Billy had forgotten to unplug the clock before he flung it, and it boomeranged back at him, heading right for his face. He ducked just in time to see it land on the floor next to his bed.

"Hey, you better pull up on your hand break, Georgie Boy," the teenage voice said. "Violence is never the answer."

All Billy could think about was that this voice, so confident and so invisible, was coming from an empty, floating shirt.

The shirt didn''t answer. It spun around and headed toward Billy, who had pushed his body flat against the wall, hoping it would open up and let him escape.'