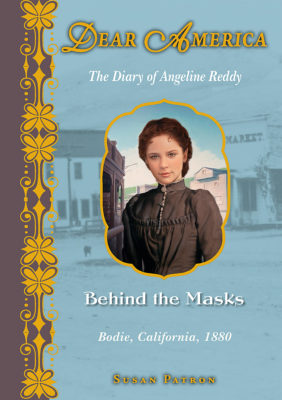 Dear America: Behind The Masks

Growing up in the wild gold-mining town of Bodie, California, in the 1880s, Angeline Reddy has seen it all -- saloons, brawls, and a whole lot of desperation. When her father, Bodie's greatest lawyer, is declared murdered, Angie knows deep in her heart that he isn't dead and decides it is up to her to solve the mystery of what happened to him. But when her mother takes ill and a mysterious ghost appears, putting together the puzzle pieces seems impossible. Not to mention, a gang of vigilantes, the 601, is raging out of control, running folks out of town, and nobody seems safe.
Will Angie, with the help of her friends Ellie and Ling Loi, and the mysterious and tragically handsome Antoine, be able to uncover the secret of her father's disappearance?
Susan Patron

Susan Patron is the author of many critically acclaimed novels for children including the Newbery Award winner, THE HIGHER POWER OF LUCKY; its follow-up book, LUCKY BREAKS; and the early chapter book MAYBE YES, MAYBE NO. She is a former librarian, now full-time writer. She and her husband live in a small cabin in the high desert of the Eastern Sierra of California.

I knew there was trouble when I lifted up the lid of my father''s coffin and he wasn''t in it...

Of course Momma hadn''t for one minute believed the report of Papa''s murder, which was supposed to have occurred on the stairway between Molinelli''s Saloon and Papa''s law office on the floor above. This news was delivered last night by a young clerk from the Wells Fargo & Co. office who said his name was Remi Nadeau. He said "Madame" to Momma and "Miss Angeline" to me, and explained that Wells Fargo was deeply saddened by our loss, which was also theirs. Mr. Nadeau regretted that the knife used by the murderer had not been found and there were no other clues.

I wasn''t sure whether the loss he spoke of was Papa''s life or the valise full of scrip, $10,000 of a special currency created by the Standard Consolidated Mining Company. Of course those Standard Dollars, as we call them, were stolen and are missing.'