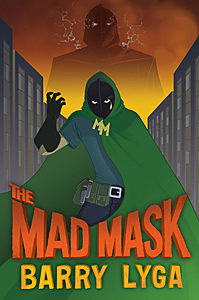 THE MAD MASK is book two in critically acclaimed author Barry Lyga's Archvillain series!Things haven't been going well for Kyle since Mighty Mike became the new town hero. He's pretty sure he could fix this disaster if he could expose Mike's secret (he's an alien), but to do that Kyle would have to admit he is the Azure Avenger -- the unintentional town archvillain.One night a new masked hero, aptly named the Mad Mask, arrives, boasting to the Azure Avenger of an off-the-charts IQ and superior superpowers. Yet the Mad Mask has come seeking intellectual assistance in building Ultitron (the robot of all robots). In exchange he offers to allow the Azure Avenger to use the awesome Ultitron to rid the world, or at least Bouring, of Mighty Mike. Forging alliances isn't usually Kyle's style, but it seems he has no choice. While Kyle agrees to help, he also has another plan: finding out who the Mad Mask is and how he got his powers. Because the last thing the Azure Avenger needs is another mindless archvillain hanging around town!
Barry Lyga

Barry Lyga is the author of ARCHVILLAIN and THE MAD MASK, the first two novels of Kyle Camden's adventures. He's also the author of several critically acclaimed YA novels including THE ASTONISHING ADVENTURES OF FANBOY AND GOTH GIRL, as well as its follow-up, GOTH GIRL RISING; BOY TOY; and HERO-TYPE. Barry lives in Brooklyn, New York. When he's not writing he uses his superpowers to fight crime.