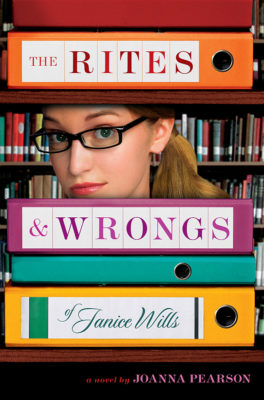 The Rites & Wrongs of Janice Wills

The Japanese hold a Mogi ceremony for young women coming of age. Latina teenagers get quinceaneras. And Janice Wills of Melva, NC ... has to compete in the Miss Livermush pageant.

Janice loves anthropology--the study of human cultures--and her observations help her identify useful rules in the chaotic world of high school. For instance: Dancing is an effective mating ritual--but only if you're good at it; Hot Theatre Guys will never speak to Unremarkable Smart Girls like Janice and her best friend, Margo; and a Beautiful Rich Girl will always win Melva's annual Miss Livermush pageant.

But when a Hot Theatre Guy named Jimmy Denton takes an interest in Janice, all her scientific certainties explode. For the first time, she has to be part of the culture that she's always observed; and all the charts in the world can't prove how tough--and how sweet--real participation and a real romance can be.

Funny, biting, and full of wisdom, this marks the debut of a writer to watch.
Joanna Pearson

Joanna Pearson grew up in the actual Livermush Capital of the World -- Shelby, North Carolina. She recently received both her MD and MFA degrees from the Johns Hopkins University, and her work has appeared in The New York Times and The Journal of the American Medical Association. She lives in Baltimore, Maryland. This is her first novel.

--- - ! "He put his hand on my forearm. With the too-bright sun pouring in through the car windows and his fingers on my skin, I felt time slow down. He was touching my arm, and his hand was radiant with warmth like a miniature sun. He crinkled his crinkly brown eyes at me. Kind eyes. He worried about me! And I loved his hand on my arm.
\tANTHROPOLOGIST'S NOTE: There is an interesting tradition of belief in the power of “healing touch.” It involves various energies that I don't really understand. I'd previously believed this idea sounded funny and quaint, but whatever was radiating from his hand, I was becoming a believer."