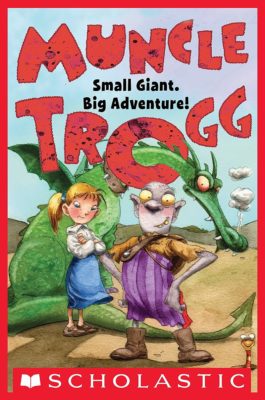 by Janet Foxley, Illustrated By O'Kif

A topsy-turvy fairy tale about a small giant on a big adventure!Let's get ready to grumble! Mount Grumble is where the giants live. But (contrary to what you might think, maybe because of their name) not every "giant" (see?) is, um...big. In fact, Muncle Trogg is so SMALL that all the other giants make fun of him for being (uh-oh) people-sized. And toss him around like a football!Fed up, Muncle Trogg climbs down Mount Grumble to take a look at the Smallings (that would be humans) he supposedly looks like. What he discovers is......a sulky green dragon and a terribly sensible girl? But when Mount Grumble is put in harm's way, it's up to little Muncle to be the bigger smallest giant, prove that size doesn't matter, and somehow save his home!"Sparkling. A cracking tale." -- The Times of London
Janet Foxley

Janet Foxley is the winner of the third annual LONDON TIMES/Chicken House Children's Fiction Competition. Having written all her life, and now in her sixties, Janet was thrilled to see her first novel, MUNCLE TROGG, a funny story about the smallest giant in the world, published. THE FLYING DONKEY is Muncle's second adventure. Janet lives in an old farmhouse near Carlisle, England, with her husband, and has two grown children.

O'Kif is an award-winning illustrator whose work has been published in magazines, graphic novels, and children's books around the world. He lives in Buenos Aires, Argentina.