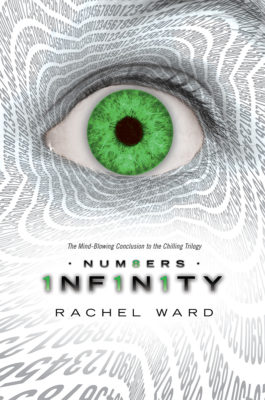 No matter what it takes, Sarah's desperate to escape from the numbers.

Always numbers. Sarah loves Adam, but can't bear the thought that every time he looks in her eyes, he can see her dying; can see her last day.

It's 2029. Two years since the Chaos. Sarah and Adam are struggling to survive. She knows he always envisioned them together "'til death do us part." But will a child come between them? The child she loves. The child he saved.

Little Mia was supposed to die that New Year's Day. The numbers don't lie. But somehow she changed her date. Mia's just a baby, oblivious to her special power. But ruthless people are hunting her down, determined to steal her secret.

Because everyone wants to live forever.
Rachel Ward

\"Did you hear what she said? Did you hear, Sarah?\"
\tMia did it again, \"Dada,\" and reached her arms up toward him. He scooped her up and danced around with her, and it was like he'd forgotten everything else, just for a minute. It reminded me why I loved him.
\tLove him, I remind myself now. Love, not loved. I love Adam Dawson.
\tIf I say it often enough, think it often enough, perhaps I'll still believe it.
\tBut it's difficult if you know that when he looks in your eyes he can see you dying.
\tI close my eyes and try to empty my head of it all, to let sleep wash over me and blank me out, but everything's all mixed up: people, places, words, and numbers.
\tAlways numbers.

Mia's eyes are filling with tears, and Sarah's not looking at me. I know I'm ranting, but I can't stop.

\"I'm eighteen, with a girlfriend and three children to look after, a baby on the way, and no home and no food, and it's never gonna get better. All I know is it's gonna end one day because I see the end everywhere, in everyone, and I wish I didn't. It could all be over tomorrow or the next day, or the next. Do you think I want this?\"

And now my stomach's churning. If she's not on my side no more, then I got nothing. But we have to go. It's not safe here."