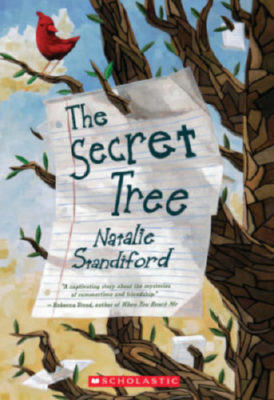 What is your secret?

Minty's neighborhood is full of mysteries. There's the Witch House, a spooky old farmhouse on the other side of the woods from where Minty and her best friend, Paz, live. There's the Man Bat, a seven-foot-tall half man, half bat who is rumored to fly through the woods. And there are the Mean Boys, David and Troy, who torment Minty for no reason, and her boy-crazy older sister, Thea, who acts weirder and weirder.

One day Minty spots a flash in the woods, and when she chases after it, she discovers a new mystery -- a Secret Tree, with a hollow trunk that holds the secrets of everyone in the neighborhood. Secrets like:

I put a curse on my enemy. And it's working.

I'm betraying my best friend in a terrible way.

No one loves me except my goldfish.