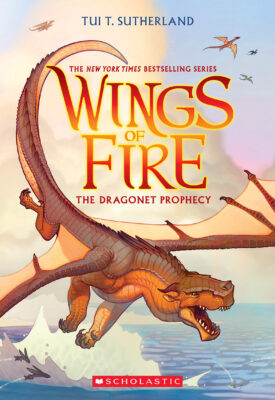 Wings of Fire Book One: The Dragonet Prophecy

Clay and his friends have grown up under a mountain, secretly raised by the Talons of Peace to fulfill a mysterious prophecy. The five young dragons are destined to end the war that's been raging between the tribes of Pyrrhia -- but how they'll do this, none of them knows.

But not every dragonet wants a destiny. When one of their own is threatened, Clay and his friends decide to escape. Maybe they can break free and end the war at the same time -- or maybe they'll risk everything ...
Tui T. Sutherland

--- - “Leave?” Clay echoed, startled. “How? On our own?”
“Why not?” Tsunami said. “If we can find a way out–why should we have to wait another two years? I'm ready to save the world now, aren't you?”
“We can't stop the war by ourselves,” he said. “We wouldn't know where to start.”
Still, part of him couldn't help imagining what it would be like to go home now. Back to the marshes, to the swamps, to a whole tribe of MudWings who looked like him and thought like him…back to his parents, whoever they were…
What if they could do it?
What if they could escape, and survive, and save the world…their own way?