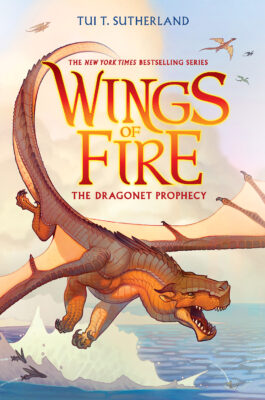 Wings of Fire Book One: The Dragonet Prophecy

The seven dragon tribes have been at war for generations, locked in an endless battle over an ancient, lost treasure. A secret movement called the Talons of Peace is determined to bring an end to the fighting, with the help of a prophecy -- a foretelling that calls for great sacrifice.

Five dragonets are collected to fulfill the prophecy, raised in a hidden cave and enlisted, against their will, to end the terrible war.

But not every dragonet wants a destiny. And when the select five escape their underground captors to look for their original homes, what has been unleashed on the dragon world may be far more than the revolutionary planners intended . . .
Tui T. Sutherland

--- - “Leave?” Clay echoed, startled. “How? On our own?”
“Why not?” Tsunami said. “If we can find a way out–-why should we have to wait another two years? I'm ready to save the world now, aren't you?”
“We can't stop the war by ourselves,” Clay said. “We wouldn't know where to start.”
Still, part of him couldn't help imagining what it would be like to go home now. Back to the marshes, to the swamps, to a whole tribe of MudWings who looked like him and thought like him…back to his parents, whoever they were . . .
What if they could do it?
What if they could escape, and survive, and save the world . . . their own way?