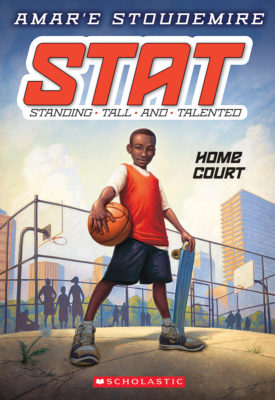 Eleven-year-old Amar'e Stoudemire has a lot going on. He loves to go skateboarding in the park. He takes his school work very seriously. He helps out with his dad's landscaping company. And he likes to play basketball with his best friends-but just for fun.
When a group of older kids start disrespecting his boys on their neighborhood basketball court, there is only one solution. Amar'e must step in and use his athletic ability and intelligence to save the day. This experience leads Amar'e to realize that basketball is his true passion.
Based on the life of All-Star NBA sensation Amar'e Stoudemire, who overcame many obstacles to become one of the most popular figures in sports today.

Amar'e is just as versatile in his off the court life as he is on. He is devoted to several charities. He promotes literacy and education. He is a media darling. And he has an amazing story to tell in this heartfelt, accessible middle-grade series.
Tim Jessell

Amar'e Stoudemire, Captain of the New York Knicks and a six-time NBA All-Star, is a well-respected professional basketball player who has left his mark on the game and the community through his award winning outreach. He is focused on creatively inspiring youth to avoid poverty through education. He is the father of three children.

--- - We were getting close to the corner now. You know the spot. NBA players take tons of 3s from there because it's a shorter shot and a straight, squared-up look. And that means that we all practice from there all the time too, heaving it up and trying to do what they do. Even his dribbling changed a little. You know how it does that when someone's about to take a shot? It was going to be one jump shot from the corner. I didn't think I could get up and contest it with his length, and there was a good chance it would go in.
But that's right where the big crack in the court was. It was the one I stumbled over last game. That's the whole reason I remembered it. Maybe if Carlos had tripped over it then, he would've remembered it too. But he hadn't, so he had to learn that lesson now. With his eyes already radar-locked, sizing up the rim, he had no idea it was coming.
“Look out, man,” I heard Yeti yell behind me, but it was too late.
The edge of Carlos's sneaker clipped the raised edge of the cracked black top.
“What the?” he blurted.
I didn't answer, just reached in and grabbed the ball as he tumbled sideways toward the fence. I turned fast, and for this weird moment, there were four sets of eyes staring right at me. Yeti and Ledge were facing forward, waiting to rebound in case Carlos had missed. And Tavoris and Deuce were facing me, wanting to be ready for whatever it was I was planning. Now they knew what it was. They stepped in front of their guys, and I had clear sailing to the hoop.
One dribble, two dribbles, pull up, pop! If the rim still had any net left on it, it would've swished.