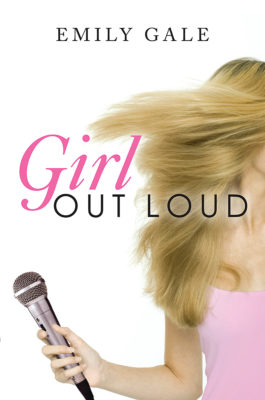 Kass Kennedy is nobody's idol. She does forget the lyrics. She's not a gleek. The x factor? Not her! Read her lips: She has the right to remain silent.

Just try telling that to her dad.

Because he's totally lost it this time, demanding Kass audition for a TV talent show. Which would be slightly less than death-by-embarrassment if Kass could (duh!) actually sing. And if even the smallest part of her craved the spotlight. Stardom is her dad's dream, not hers. But he's so fragile, she's afraid he just might crack if she doesn't go through with his latest, craziest plan.

Not helping: Her hopelessly MIA mom. The budding criminal mastermind also known as her kid brother. And amateur shrink Izzy and used-to-be-sweet Char, who've gone all frenemies over a boy in brown boots. (Don't ask.)

It's only rock n' roll? If only! Inside, Kass is screaming, but no one is listening. How loud does a girl have to shout to be heard?
Emily Gale

EMILY GALE's nickname as a child was "Kojak" (for younger readers, that is a 1970s television show about a big bald man who sucked lollipops and solved crimes and said, "Who loves ya, baby?" a lot). Emily is scared of chickens, but not of spiders. Visit her at www.emilygale.co.uk and follow her on Twitter @EmilyGale.

--- - ! '"I want us to watch TV," Dad says, as if that''s a perfectly normal thing to announce after years, literally years, of us never being allowed to watch Saturday night television for fear of ruining the tradition of the four of us – including whichever version of Dad happens to be present – eating reheated pizza around the kitchen table.

Nobody speaks. Until I do.

Dad smiles, the kind of smile that lets me know there is much, much more to this than I want to know. He doesn''t break tradition for nothing.

"They''ll be starting a new series of X Factor soon," he says.

"And guess who I think should be front and center at the auditions!" It''s not a question.

Mom gives me a sympathetic look and touches my arm lightly as she says, "Well, you did say you wanted to watch it this evening."