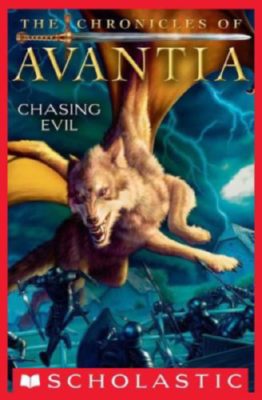 The Chronicles of Avantia #2: Chasing Evil

Tanner and Gwen are on a quest to protect their homeland from being overtaken by Derthsin's evil army. In order to save Avantia, they must retrieve four parts of an ancient mask, which grants power over all of the Beasts of the land.
After acquiring the first piece of the Mask of Anoret and saving Gwen's twin brother, Geffen, from captivity, Gwen and her Beast, Gulkien, sleep soundly. But Geffen is gone in the morning and he has taken the portion of mask with him. Gwen refuses to believe he has abandoned them but Tanner suspects otherwise. Their search to bring Geffen back leads them to a destroyed village and a new warrior who isn't exactly what he seems to be.
Adam Blade