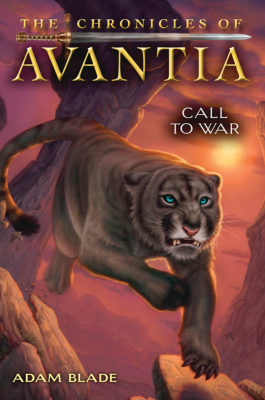 The Chronicles of Avantia #3: Call to War

Avantia burns in the fires of war. Derthsin's evil armies swarm the land, and Tanner and the Chosen Riders are all that stand in their way.

Will they encounter more Beasts on their treacherous journey to the Southern Caves? And will the dark forces that seek control of Tanner prevent the Riders from fulfilling their destiny?
Adam Blade

--- - ! "“Woo!” Castor shouted, and Nera bounded beside Firepos. “Well done!”
\tBut Gwen didn't join in with the congratulations" - ! " her face was clouded with unhappiness.
\t“What are you doing?” she asked, gazing into Tanner's face. “We cannot afford to help everyone we see. We're on our way to the Southern Caves, remember – for the mask? This type of thing is happening all over Avantia and we can't stop what we're doing every time we see a skirmish.”
\tCastor hid his dagger back in his belt. “She has a point, Tanner,” he said. “You know me, I love a good battle, but it's the mask we're after, and Derthsin.”"