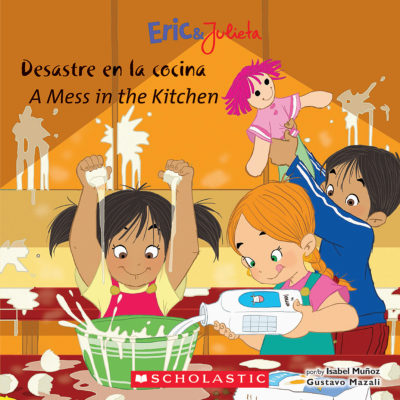 Eric is dying to play with his sister Julieta and her friend Lupe, but won't admit it. So he tries to hide one of Julieta's dolls on top of the kitchen shelves... unfortunately, as he climbs up he trips and falls with a loud thump! The girls come to find out what happened, and Eric, to hide his prank, gets them to make cookies for everyone. The idea is as wild as the mess they're about to create.

Gustavo Mazali lives in Buenos Aires, Argentina. A self-taught artist, he has illustrated many children's books published in Europe and the United States. His children are his main source of inspiration.

Isabel Muñoz lives in Buenos Aires, Argentina. She taught literature to middle-school children and now works as a freelance writer and editor. She studied Language Arts at the University of Buenos Aires and has published more than one hundred books for children of all ages.