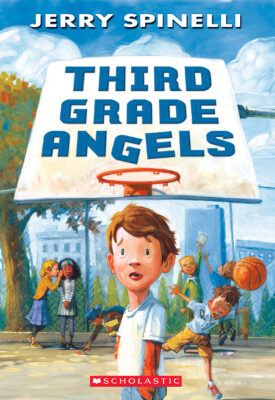 by Jerry Spinelli, Illustrated By Jennifer A. Bell

George, aka "Suds," has just entered third grade, and he's heard the rhyme about "first grade babies/second grade cats/third grade angels/fourth grade rats," but what does this mean for his school year? It means that his teacher, Mrs. Simms, will hold a competition every month to see which student deserves to be awarded "the halo" - which student is best-behaved, kindest to others, and, in short, perfect. Suds is determined to be the first to earn the halo, but he's finding the challenge of always being good to be more stressful than he had anticipated. Does he have to be good even outside of school? (Does he have to be nice to his annoying little sister?) And if Mrs. Simms doesn't actually see him doing a good deed, does it even count?

Jennifer A. Bell has illustrated almost a dozen children's books, including Little Dog, Lost, When Dad Says "I Love You", and the Stella Batts series. Her work has also appeared in magazines and on greeting cards. She lives with her husband and son in Toronto, Ontario. Visit her online at www.jenniferabell.com.

Jerry Spinelli won the Newbery Medal in 1991 for Maniac Magee, one of his more than 25 acclaimed books for young readers. He now lives in West Chester, Pennsylvania, with his wife, Eileen Spinelli, who is also an author of children's books.

It was a warm and sunny day, but really windy. Swings were flapping even when nobody sat on them. Basketball shots were curving. Besides the wind, everything was going along pretty normal until a yellow baseball cap came flying onto the playground. On the other side of the fence a lady in a sweat suit was stopped, jogging in place. She was pointing to her hat, which had blown off and landed among a bunch of us third-graders.
\tFor a second nobody moved. And then it hit all of us at once: Good deed! About ten of us pounced on the hat. There were so many hands the best I could do was grab somebody's wrist. We were wrenching and pulling and twisting ten different ways.
\t“I got it!”
\t“I got it!”
\t“Let go!”
\t“I was first!”
\t“I was first!”
\t“Oww!”
\tSuddenly we all snapped apart like a broken wishbone. Eddie Shank was holding the rim of the cap. Diana Briggs was holding the rest.
\tSomebody said, “Uh-oh.”"