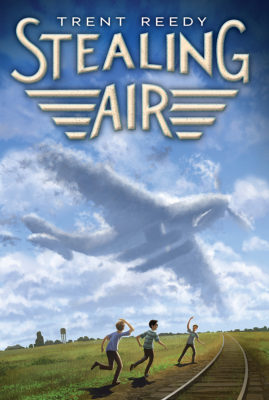 When his dad announced they were moving to Iowa, Brian looked forward to making some new friends. But on his first day there he makes an enemy instead -- Frankie Heller, the meanest kid in town. Brian needs to hang out with someone cool to get back on track. . . .

Alex has always been the coolest guy around, and good with money, just like his dad. But now the family is struggling, and he needs to make some cash to keep up appearances. Then an opportunity falls in his lap . . . .

Max is a scientific genius, but his parents are always busy with their own work. Building an actual plane should get their attention -- if only he wasn't scared of heights . . .

The answer to all three boys' problems starts with Max's secret flyer. But Frankie and the laws of popularity and physics stand in their way. Can they work together in time to get their plan AND their plane off the ground?
Trent Reedy

--- - Alex tapped him on the shoulder. Brian risked a look back. Alex grinned widely as he leaned forward. “It's working! It's really working!”
Brian pushed the lever the rest of the way up. “Full throttle!”
The flyer rolled fast now. Brian was pushed back in his seat. He loved this part. The thrill of the aircraft's power. The mad rush just before takeoff. Speeding up to the skies.
They were halfway down the runway. Brian pulled back on the yoke. Then he felt it. The nose lifted. The front wheels were off the ground! The back wheels were up next. “We're flying!” he shouted.