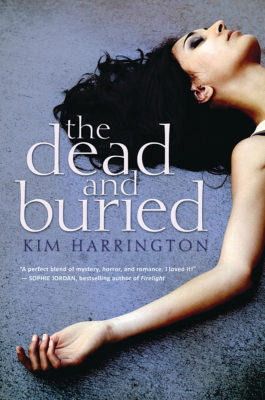 The Dead and Buried

Jade loves the house she's just moved into with her family. She doesn't even mind being the new girl at the high school: It's a fresh start, and there's that one guy with the dreamy blue eyes. . . .

Jade's little brother claims to see a glimmering girl in his room. Jade's jewelry gets moved around, as if by an invisible hand. Kids at school whisper behind her back like they know something she doesn't.

Soon, Jade must face an impossible fact: that her perfect house . . . is haunted.

Haunted by a ghost who's seeking not just vengeance, but the truth. The ghost of a girl who ruled Jade's school -- until her untimely death last year. It's up to Jade to put the pieces together before her own life is at stake. As Jade investigates the mystery, she discovers that her new friends in town have more than a few deep, dark secrets.

But is one of them a murderer?
Kim Harrington

Kim Harrington is the acclaimed author of CLARITY, an ALA Quick Pick for Reluctant readers, and PERCEPTION, which Kirkus Reviews called "a smart, paranormal mystery ride." She is also the author of the middle-grade series Sleuth or Dare. Kim lives in Massachusetts with her husband and son. When not writing, she's most likely reading, watching one of her favorite TV shows, or fantasizing about her next vacation. Visit her online at www.kimharringtonbooks.com.

\tMy shaky fingers opened the folder. The title, DISCLOSURE STATEMENT, glared up at me in all caps. Exactly what that girl Faye had told me to look for.
\tAnd there, at the bottom, was what she had wanted me to find.
\tI closed my eyes tightly, the paper trembling in my hand. I didn't want it to be this. Anything but this.
\tI reopened my eyes, but the words remained the same.
\tDeath by unnatural causes.
\tI was living in a murder house."