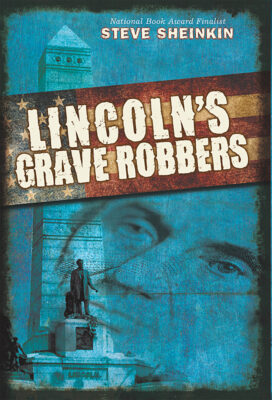 The action begins in October of 1875, as Secret Service agents raid the Fulton, Illinois, workshop of master counterfeiter Ben Boyd. Soon after Boyd is hauled off to prison, members of his counterfeiting ring gather in the back room of a smoky Chicago saloon to discuss how to spring their ringleader. Their plan: grab Lincoln's body from its Springfield tomb, stash it in the sand dunes near Lake Michigan, and demand, as a ransom, the release of Ben Boyd -- and $200,000 in cash. From here, the action alternates between the conspirators, the Secret Service agents on their trail, and the undercover agent moving back and forth between them. Along the way readers get glimpses into the inner workings of counterfeiting, grave robbing, detective work, and the early days of the Secret Service. The plot moves toward a wild climax as robbers and lawmen converge at Lincoln's tomb on election night: November 7, 1876.

--- - ! "At ten o'clock that night, Whitley was sitting at the desk in his hotel room, writing up a report. There was a gentle knock on the door.
â\x80\x9CCome in,â\x80\x9D said the chief.
The door opened. A voice sang out, â\x80\x9CGood evening, Colonel!â\x80\x9D
Whitley turned to his guest. â\x80\x9CMcCartney!â\x80\x9D he shouted, drawing his revolver. â\x80\x9CHow are you here?â\x80\x9D
â\x80\x9CPut up your shootin'-iron, Colonel,â\x80\x9D McCartney said. â\x80\x9CI merely called to pay my respects. I am going back, of course.â\x80\x9D
And McCartney really did walk back to prison. Smiling all the way.
Herman Whitley never did figure out how McCartney got out of jail that night. However he did it, the stunt illustrated a serious challenge facing the U.S. government in the 1870s. The Secret Service was absolutely determined to catch counterfeiters and keep them behind bars. But coney men were just as eager to get free -- and they were good at it, too."