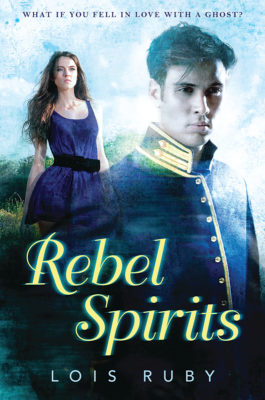 Lori Chase doesn't know what to think about ghosts. She may have seen a few in the past, but those were just childish imaginings . . . right? Only now that she is living in Gettysburg, Pennsylvania, spirits seem to be on everyone's mind. The town is obsessed with its bloody Civil War history, and the old inn that Lori's parent run is supposedly haunted by the souls of dead soldiers.

Then Lori meets one such soldier -- the devastatingly handsome Nathaniel Pierce. Nathaniel's soul cannot rest, and he desperately needs Lori's help. Because Nathaniel was not killed in the famous battle. He was murdered. Lori begins to investigate the age-old mystery, stumbling upon shocking clues and secrets.

At the same time, she can't help falling for Nathaniel, just as he is falling for her . . . .
Lois Ruby

Lois Ruby is the author of several books for middle graders and teens, including The Doll Graveyard, Rebel Spirits, Steal Away Home, The Secret of Laurel Oaks, and Strike! Mother Jones and the Colorado Coal Field War. While traveling, Lois explores ghostly locations in Kansas, Pennsylvania, New Mexico, and even a few spots in Australia, Spain, and Thailand. No spirits have tapped her on the shoulder yet, but she's ready for that to happen any time now. Lois and her husband divide their time between Albuquerque, New Mexico and Chicago, Illinois. Please visit Lois at loisruby.com.

\tThe dense air shimmers. Right in front of my eyes, the molecules -- or whatever -- form themselves into a shadowy image. A young man, maybe two years older than I am, wearing that same blue visor cap. He's still in that ragged military uniform, which maybe used to be navy blue, and one scuffed boot. His eyes capture me" - ! " obsidian-black pools. His lips move, but no sound comes out. Is he mute? Am I deaf?
\t\"Why are you here, Nathaniel Pierce?\"
\tHe shakes his head from side to side, me following those black eyes. He turns all the way around. That's when I see the torn fabric and dried blood of a gaping hole in the middle of his back. As if someone had aimed for his heart."