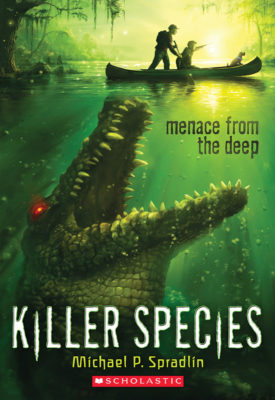 Killer Species #1: Menace From the Deep

Emmet Doyle is not in the best mood when he arrives in Florida City. His father is a wildlife biologist, and has been summoned to the Everglades, dragging Emmet along with him. Though still in mourning from losing his mom a year ago, Emmet's trying hard to keep a good attitude.

Upon their arrival, however, things quickly get weird. Dr. Rosalita Geaux, the Park Superintendent, wastes no time in revealing the reason she called Emmet's father to Florida. A strange creature was recently found dead in the park, and upon seeing it, it becomes clear to everyone that this is not a native species. This is man-made.

Deep in the swamp, someone has been experimenting to create a new breed of apex predator. And they're about to set them loose.
Michael P. Spradlin