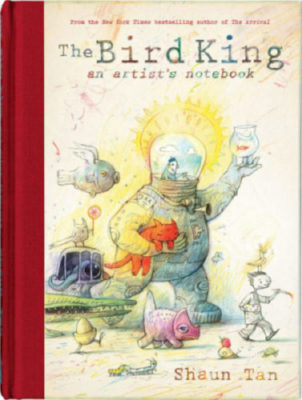 "I'm often wary of using the word 'inspiration' to introduce my work -- it sounds too much like a sun shower from the heavens, absorbed by a passive individual enjoying an especially receptive moment. While that may be the case on rare occasions, the reality is usually far more prosaic. Staring at a blank piece of paper, I can't think of anything original. I feel utterly uninspired and unreceptive. It's the familiar malaise of 'artist's block' and in such circumstances there is only one thing to do: just start drawing." -- Shaun Tan

And when Shaun Tan starts drawing, the results are stunning. In The Bird King: An Artist's Notebook, we find a window into the creative process: the stops and starts, the ideas that never took off, and the ones that grew into something much bigger. Fans of The Arrival will recognize the quirky, surreal sensibility that is so distinctly Shaun Tan in this stunning collection, and gain insight into how his many gorgeous books were made.

Shaun Tan is the New York Times bestselling author of The Arrival, Tales from Outer Suburbia, Tales from the Inner City, Rules of Summer, and The Singing Bones. He received the Astrid Lindgren Memorial Award in 2011 and won an Academy Award for the adaptation of his picture book The Lost Thing (from Lost & Found: Three by Shaun Tan). Shaun lives in Melbourne, Australia.