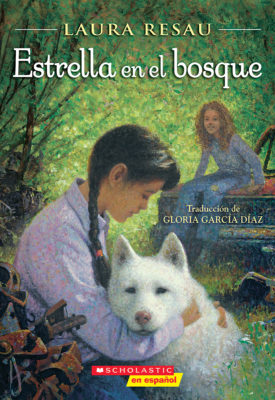 Zitlatlly and her friend find a runaway dog in the forest near the trailer park. They name it Star because the dog has a patch over its eye that looks like a star. After a while, Zitlallly believes that Star is the "spirit animal" of her father, who was deported back to Mexico after being arrested for speeding. She thinks that her father will be safe as long as Star is safe. But when Star disappears, does it mean that her father will disappear as well?
Laura Resau

Laura Resau is the author of several highly praised novels, including The Lightning Queen, drawn from Laura's experiences living in rural Mexico, as well as Star in the Forest, The Queen of the Water, Red Glass, and What the Moon Saw. She is also the author of the acclaimed notebook series, which includes: The Indigo Notebook, The Ruby Notebook, and The Jade Notebook. Laura's books have garnered many state and library awards, as well as multiple starred reviews. She lives in Fort Collins, Colorado, and donates a portion of her royalties to indigenous rights organizations.