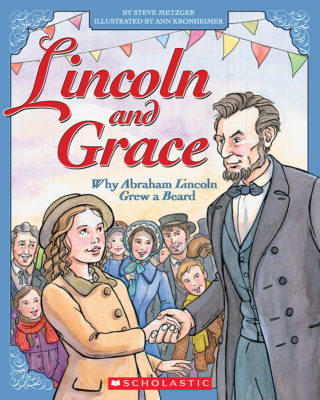 Abraham Lincoln is one of the most recognizable people, let alone presidents, in the history of the United States. Perhaps it's because his face can be seen everywhere from the $5 bill in your wallet and the penny in your pocket to national monuments across the country. Or maybe it's simply because of his signature beard. Could you ever picture Lincoln without it? I bet you would never guess that there is one little girl in particular to thank for Lincoln's beard.
LINCOLN AND GRACE is the story of Grace Bedell--the eleven-year-old who got a President to listen to her advice. In addition to learning the fascinating true story behind Lincoln's beard, children will love it because it shows that one voice--even one as small as their own--can matter.
Ann Kronheimer

Steve Metzger is the bestselling author of over sixty children's books, including Detective Blue, Pluto Visits Earth!, The Turkey Train, When the Leaf Blew In, Five Little Sharks Swimming in the Sea, and the Dinofours series. Steve lives in New York with his family.

--- - ! 'Grace Bedell''s Letter to Abraham Lincoln: October 15, 1860
Dear Sir
My father has just home from the fair and brought home your picture and Mr. Hamlin''s. I am a little girl only eleven years old, but want you should be President of the United States very much so I hope you wont think me very bold to write to such a great man as you are. Have you any little girls about as large as I am if so give them my love and tell her to write to me if you cannot answer this letter. I have got 4 brother''s and part of them will vote for you any way and if you let your whiskers grow I will try and get the rest of them to vote for you you would look a great deal better for your face is so thin. All the ladies like whiskers and they would tease their husband''s to vote for you and then you would be President. My father is going to vote for you and if I was a man I would vote for you to but I will try to get every one to vote for you that I can I think that rail fence around your picture makes it look very pretty I have got a little baby sister she is nine weeks old and is just as cunning as can be. When you direct your letter direct to Grace Bedell Westfield Chatauque County New York.
Grace Bedell'