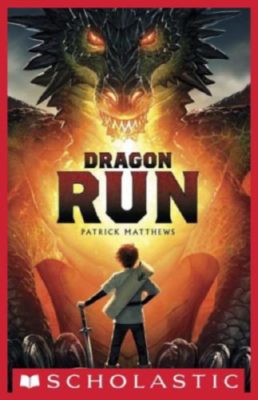 That's the truth that Al has known all his life: The five mortal races were created by dragons to gather magic. Since then, the dragons have ruled the world, branding mortals according to their worth, shaping their societies, even training a lucky few to handle magic themselves.

Now Testing Day is here, the day when Al will be assigned his place in the world. If his rank is high enough, he'll have everything he's ever wanted.

But Al is in for the shock of his life. By the time Testing Day is over, he will be shunned . . . and targeted by the ruthless assassins known as Cullers. With no magic, little money, and a sword he's not entirely sure how to use, Al must escape into the wilderness, beginning a journey that will lead him to strange new friends, brutal enemies, and the terrifying truth about the dragons.

It's one boy against the world - and some fearsome beasts - in this fun fantasy-adventure!
Patrick Matthews

Patrick Matthews is a writer and game designer who lives in Winter Springs, Florida. When he's not writing or playing, you can usually find him out exploring the roads, searching for new adventures with his wife and two boys. You can learn more at www.pat-matthews.com.

--- - A rush of excitement surged through Al, quickly tempered with frustration and fear. He'd just disarmed one of the most powerful men in the world, but what did that matter? It would take a straight, powerful stab to penetrate the man's armor, and Al didn't know how to do that. He stepped backward and nodded to the Magister to pick up his sword.
It seemed insane, but unless Primus attacked him, Al couldn't do anything. Besides, he was pretty sure the man was more dangerous without the sword