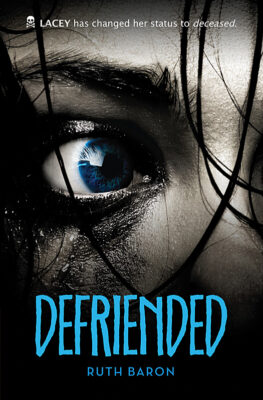 Jason has met the perfect girl. OK, so maybe he hasn't actually MET Lacey yet, but they talk online all the time. Yet despite spending most nights chatting, Lacey refuses to meet up in person. Suspicious, Jason starts googling, and his cyberstalking leads to a shocking discovery: According to multiple newspapers, Lacey died a year earlier.

Soon, Jason finds himself enmeshed in a disturbing mystery. Has he found a way to iChat with the dead? Or is someone playing a dangerous trick? Either way, Jason has to discover the truth before it's too late. You can't put up away messages from beyond the grave. . .
Ruth Baron

Ruth Baron is the web editor at O Magazine. She lives in Brooklyn, NY.

The headline glared at him from the screen.

Jason blinked. On the monitor, Lacey''s name blinked back at him. He rubbed his eyes. It was still there.

His brain sprinted through the possible explanations: It was another Lacey Gray, it was another town called Brighton' - ! ' it was all just a terribly unfortunate coincidence. The problem he couldn''t get around was the photo. The image he knew better than any shot of himself, better than any photo of anyone. It was Lacey''s profile picture. Frozen, mid-laugh, the girl of his dreams was right there in front of him. Maybe he was hallucinating. He pinched himself. Hard. It hurt, but none of the text in front of him changed.

Jason''s inbox pinged. One new e-mail. The sender''s name made his stomach twist with a mixture of relief and terror.

Whether she was alive or dead, Lacey Gray was online.'