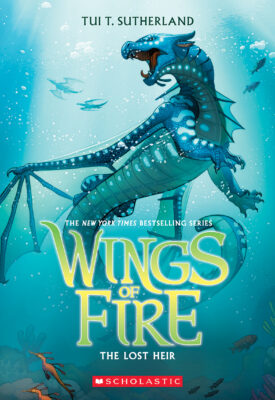 The lost heir to the SeaWing throne is going home at last.

She can't believe it's finally happening. Tsunami and her fellow dragonets of destiny are journeying under the water to the great SeaWing Kingdom. Stolen as an egg from the royal hatchery, Tsunami is eager to meet her future subjects and reunite with her mother, Queen Coral.

But Tsunami's triumphant return doesn't go quite the way she imagined. Queen Coral welcomes her with open wings, but a mysterious assassin has been killing off the queen's heirs for years, and Tsunami may be the next target. The dragonets came to the SeaWings for protection, but this ocean hides secrets, betrayal--and perhaps even death.
Tui T. Sutherland

\tShe burst into the air and kept beating her wings to rise into the sky. In the distance, she could see the cliffside cave and the worried faces of her friends poking out.
\tAn enormous splash sounded behind her. The other SeaWing surged out of the ocean. His massive tail whacked the water twice as he lifted into the air, sending giant waves rushing in all directions.
\tHe looked even bigger out here in the air. His hooked claws gleamed sharply in the sunlight. His dark blue eyes were fixed on her wings.
\tThe first true citizen of her kingdom she'd ever met, and he was coming to kill her."