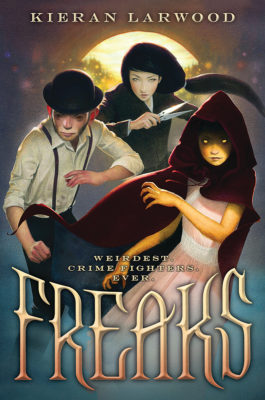 Sheba, the fur-faced Wolfgirl, can sniff out a threat from miles away. Monkeyboy clambers up buildings in the blink of an eye -- then drops deadly stink bombs of his own making (yes, THAT kind)! Sister Moon sees in the dark, and moves at the speed of light. Born with weird abnormalities that make them misfits, these FREAKS spend their nights on public display, trapped in a traveling Victorian sideshow. But during the day, they put their strange talents to use: They solve the most sinister crimes. And in a dank, desperate world of crooks and child-snatchers, they're determined to defend London's most innocent victims: the street urchins disappearing from the city's streets.
Kieran Larwood

Kieran Larwood is a kindergarten teacher on the Isle of Wight, where he lives with his wife and children. FREAKS, his debut novel, is the winner of the fourth annual Chicken House/LONDON TIMES Children's Fiction Competition. Visit him at www.kmlarwood.com and follow him on Twitter @kmlarwood.

The knife drew closer, cutting through the smoke in slow motion, now inches away from her neck. With wide eyes, Sheba saw the triumphant grin on Mrs. Crowley's face - ! " one that rapidly changed to horror as something small and stinky and betailed bounced off the nearest wall and onto her head.
\t\"Monkeyboy!\" Sheba shouted. She was about to help him when the floor beneath her gave a violent lurch.
\tShe looked down. The boards had given way, opening up a fire-filled hole to the floor below. For one horrible moment she teetered, about to spill down into the flames."