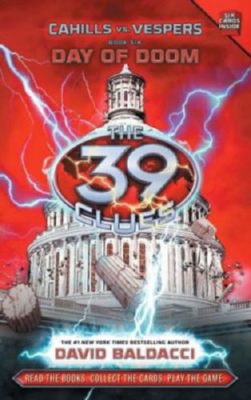 It started with a kidnapping. A shadowy organization known only as the Vespers snatched seven members of the Cahill family and demanded a series of bizarre ransoms from around the world. Thirteen-year-old Dan Cahill and his older sister, Amy, began a global treasure hunt, determined to bring back whatever Vesper One needed, so long as it kept the hostages safe.

But when they deliver the last ransom, Amy and Dan discover Vesper One's terrifying endgame. The objects he demanded are vital pieces in a Vesper plot that will harm millions of innocent people. Now the two siblings and their friends are in an all-out sprint to stop Vesper One . . . before the whole world goes BOOM.
David Baldacci

--- - Now was not the time for Amy Cahill's courage to fail. She had to keep her wits about her. Amy knew she would have to be wary of poisons, a stable of the Lucian branch. Isabel might have a hidden needle in a ring, or perhaps embedded in her shoe. Whatever the case, Amy would be ready. This was one on one. And she was going to take Isabel down, finally. She balled up her courage and prepared to face one of her worse nightmaes, Isabel Kabra.