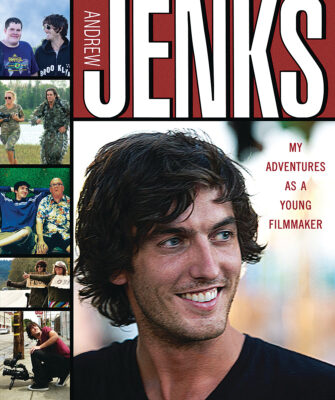 Behind the camera, Andrew Jenks has captured the attention of young adults everywhere with his innovative MTV documentary series, World of Jenks. When asked about his inspiration for the show, Jenks said, "I want to tell the stories of my generation. I want to be a filmmaker that is able to capture what my generation thinks, how they act, and what they ultimately stand for."

Now fans of all ages will be able to discover everything they've ever wanted to know about Jenks, from growing up to becoming a renowned documentary filmmaker in this comprehensive photo-biography. How did he do it? By following his own rules for success-always be flexible, fake it till you make it, and never accept no.
Andrew Jenks

Andrew Jenks is the award-winning filmmaker who created the MTV documentary series: World of Jenks. This is his first book for young adults. To learn more about him and his work visit www.andrewjenks.com.

Whenever I get good news, I always take a moment to enjoy it on my own. Dahl's news was crazy good, life-changing, I'm-going-to-Japan-for-nine-months-to-make-a-million-dollar-movie good, so I lay on my bed for a long while, savoring the moment before it was tainted with anything real.

I walked downstairs, went into the living room where my dad was watching TV, and laid down on the crummy old white sofa with a huge grin on my face.

"What?" My dad asked.
"ESPN is going to pay for the movie."
He gave me a look to see if I was serious. His face was stunned. Then he pivoted in his chair and grinned. There's no better feeling than making my dad proud. One of the first things he said was something I will never forget.
“Someone else has now given you money to make a movie," my dad said. "This is real."