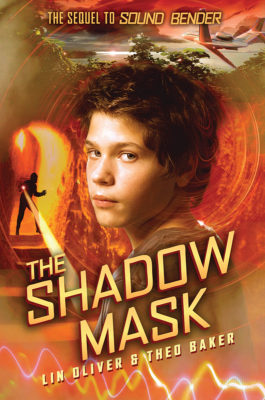 Leo is back in New York, and things are worse than ever. His Uncle Crane has isolated him from his friends, pulled him from his school, and is keeping him under near-constant surveillance.

When a strange mask once owned by his father begins to draw Crane's attention, however, Leo is presented with a devil's bargain. If he helps Crane find the mask's other half, he can return to his life and his friends. To sweeten the deal, Crane will even pay for a fact-finding mission to check out Leo's parents' plane crash.

There's just one catch. In order to find the mask, Leo will have to travel across the world -- and take it from its rightful owners.
Theo Baker

Theo Baker has had a lifelong fascination with sound. Wizened in Santa Barbara and toughened by New York, Theo has worked as a record producer, a music journalist, a sound designer, and a court reporter, amongst other odd jobs. He lives in Los Angeles, California.

--- - ! "The rain only fell harder as lightning continued to criss-cross the sky. A few of the porters tried to paddle, but there was nowhere to land, no safe harbors, no sand banks--only the steep rock walls on either side. I looked up and saw torrents of brown foamy water pouring over the cliffs into the river. And the river was suddenly almost white, churning rapids filled with sticks and rocks. Visibility plummeted. \
\t“Get us out of here!” Crane screamed. “It's flooding!”
\t“We've got to push on,” Dr. Haga replied, his voice hoarse and shredded by the wind and rain. “We must get out of the valley.”
\t“Do whatever it takes, Haga!”
\t“Everyone, full speed,” Haga cried against the storm.
\tAll the porters stood up straight, and gunned their motors, the tails of their boats sliding out diagonally. We were in heavy rapids. Waves of brown foamy water were pouring over the sides of our boat and we bobbed up and down like a toys in a bathtub, now catching air over a wave, now sinking down into the trough, more water spilling in. Two supply boats in front slammed into the rock wall and snagged, only to get freed in time to tumble straight into a swirling rapid. I heard heavy logs and rocks bouncing off our hull. Clutching the sides of the boat, I hid my head under the bow as water poured over me. I heard Diana screaming, and glanced up to see her halfway over the boat.
\t“Diana!” I started to scream, but a torrent of water cut me off."