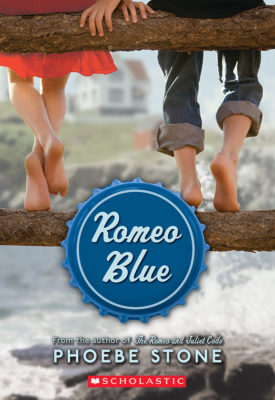 But a year has passed now, and Flissy has grown to love life in Bottlebay and grown to love Derek, the boy the Bathburns have adopted. Then a man claiming to be Derek's true father arrives, and soon he's asking all sorts of strange questions. Flissy has a nose for trouble. Has Derek's new father come to take him away from Flissy forever . . . or is there something even more sinister afoot in Bottlebay, Maine?

Secrets, spies, and sleuthing abound in this charming follow-up to Phoebe Stone's The Romeo and Juliet Code.

As soon as I was in Derek's room I dropped forward, facedown on the floor again. My tears fell on the wooden surface, my mouth pressed against the polished pine. "Why is Uncle Gideon going to a prison?" I whispered. Derek closed the closet door. I could feel more tears and sobs threatening to come up out of me in a howling sort of way.

Derek put his hand on the back of my head as I lay there. "Oh Fliss, don't think about it," he said. “Don't worry, Gideon will get them out."

"Get who out?" I said, sitting up and shaking my head back and forth. "Who do you mean? Who?" I put my hands over my ears again.
"Flissy," said Derek, "listen to me."