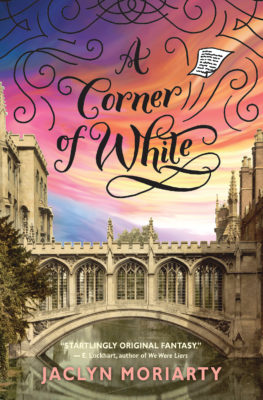 A Corner of White (The Colors of Madeleine, Book 1)

Series: The Colors of Madeleine

This is a tale of missing persons. Madeleine and her mother have run away from their former life, under mysterious circumstances, and settled in a rainy corner of Cambridge (in our world).

Elliot, on the other hand, is in search of his father, who disappeared on the night his uncle was found dead. The talk in the town of Bonfire (in the Kingdom of Cello) is that Elliot's dad may have killed his brother and run away with the Physics teacher. But Elliot refuses to believe it. And he is determined to find both his dad and the truth.

As Madeleine and Elliot move closer to unraveling their mysteries, they begin to exchange messages across worlds -- through an accidental gap that hasn't appeared in centuries. But even greater mysteries are unfolding on both sides of the gap: dangerous weather phenomena called "color storms;" a strange fascination with Isaac Newton; the myth of the "Butterfly Child," whose appearance could end the droughts of Cello; and some unexpected kisses...

Jaclyn Moriarty is the award-winning author of A Corner of White, The Cracks in the Kingdom, A Tangle of Gold, The Year of Secret Assignments, The Murder of Bindy Mackenzie, The Ghosts of Ashbury High, and The Spell Book of Listen Taylor. A former media and entertainment lawyer, Jaclyn grew up in Sydney, Australia, lived in the United States, Canada, and UK, and now lives in Sydney again. She is very fond of chocolate, blueberries, and sleep.

She leaned her bike against a wall and saw it again -- that fine line of white along the seam of the parking meter. \t
\tShe tried to pull it out with her fingertips but it was too deeply embedded. By holding two fingernails, one above and one below, she managed to grasp the edge of the paper and slowly draw it out.
\tIt was a thin piece of paper, folded in half.
\tShe unfolded it and read:

\tHelp me!
\tI am being held against my will!

\tShe laughed aloud, looking at the base of the parking meter: the split concrete.
\t\"You're trying to escape,\" she said, then glanced around to check that nobody had seen her talking to a parking meter. The street was empty.
\tIt was growing dark, everything turning shades of grey.
\tThe paper in the palm of her hand made her shudder suddenly.
\tI am being held against my will!
\tWhat if it was real? A message from a stranger who was trapped?
\tStrange place to put it, though, she thought, and smiled again.
\tI am being held against my will. \t
\tOn the darkening path, she took paper from her backpack, and she wrote a reply to the note.
\tShe folded it and slid it into the parking meter until it too was nothing but a fine white line.
\tThen she rode away."