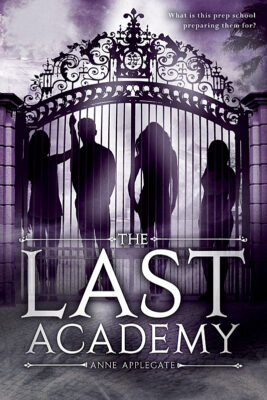 Camden Fisher arrives at boarding school haunted by a falling-out with her best friend back home. But the manicured grounds of Lethe Academy are like nothing Cam has ever known. There are gorgeous, preppy boys wielding tennis rackets, and circles of girls with secrets to spare. Only . . . something is not quite right. One of Cam's new friends mysteriously disappears, but the teachers don't seem too concerned. Cam wakes up to strangers in her room, who then melt into the night. She is suddenly plagued by odd memories, and senses there might be something dark and terrible brewing. But what? The answer will leave Cam--and readers--stunned and breathless, in this thrilling debut novel.
Anne Applegate

Anne Applegate attended a boarding school in Santa Barbara as a teenager. She later graduated from Tufts University with a degree in clinical psychology, and now lives in California with her husband and three children. Please visit her online at www.anneapplegate.com.

\tThen I was at Nora's door. There was no one milling about in the hallway this time. In fact, it seemed even more dark and deserted than usual.
\t\"Come in!\" Nora yelled. She was sitting out on the patio. Already Jessie's stuff had a dusty, Pharaoh's tomb look to it. I hurried through the room and joined Nora outside.
\t\"Where have you been?\" I demanded.
\t\"Crisis counseling.\" She jumped out of her seat and paced the patio, stalky as a wet cat.
\t\"What really happened to Jessie?\" I asked. \"Did she . . .\"
\t\"I don't know. When I woke up, she was gone.\"
\t\"What do you mean, 'when you woke up she was gone'? People were talking about an ambulance. They said she killed herself.\"
\t\"Look, I don't know anything about that.\" Nora enunciated every word. I wanted to shake her or something. Jessie had been my friend too.
\t\"But what about all her stuff?\" I demanded. \"What about her wallet? Are you telling me she just got up in the middle of the night and walked out of your room and . . . disappeared?\""