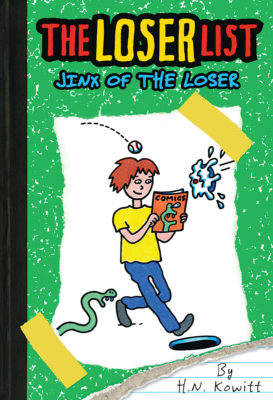 Danny Shine doesn't care about his school's baseball team, the Woodchucks. But he's kind of having fun sitting right behind third base at the big game. He even catches a foul ball -- but that means the Woodchuck third baseman doesn't catch it, and the team loses. Suddenly, Danny finds himself back at Square One: Loserville.

When the Ferris wheel at the school fair breaks while Danny's on it, he gets a new reputation as the school jinx. Can he break the curse before he ruins everything he touches -- including his relationship with the super-cool girl of his dreams, Asia O'Neill?
H. N. Kowitt

H. N. Kowitt has written more than forty books for younger readers, including The Loser List series, Dracula's Decomposition Book, and The Sweetheart Deal. She lives in New York City, where she enjoys cycling, flea markets, and gardening on her fire escape. You can find her online at www.kowittbooks.com.