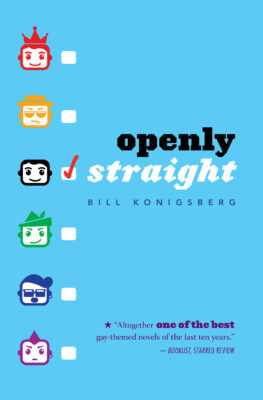 The award-winning novel about being out, being proud, and being ready for something else. Pre-order the companion novel Honestly Ben now (out 3/28/17)!

Rafe is a normal teenager from Boulder, Colorado. He plays soccer. He's won skiing prizes. He likes to write.

And, oh yeah, he's gay. He's been out since 8th grade, and he isn't teased, and he goes to other high schools and talks about tolerance and stuff. And while that's important, all Rafe really wants is to just be a regular guy. Not that GAY guy. To have it be a part of who he is, but not the headline, every single time.

So when he transfers to an all-boys' boarding school in New England, he decides to keep his sexuality a secret -- not so much going back in the closet as starting over with a clean slate. But then he sees a classmate breaking down. He meets a teacher who challenges him to write his story. And most of all, he falls in love with Ben... who doesn't even know that love is possible.
Bill Konigsberg

Bill Konigsberg is the author of six books for young adults, which have won awards including the Stonewall Book Award, the Sid Fleischman Award for Humor, and the Lambda Literary Award. Bill lives with his husband, Chuck, and their two Labradoodles, Mabel and Buford. Please visit him online at billkonigsberg.com and @billkonigsberg.

As I stuffed my second empty duffel bag into the dorm closet, I decided on a shower, since I smelled like my expiration date had come and gone weeks ago. A guy zoomed by the doorway, then I heard the footsteps slow and stop.
"Hey, guy," he said. "We're gettin' a game going downstairs, do you...holy Jesus!?
"What?" I said.
"You look just like Schroeder."
"From Peanuts?"
"What? No. This kid. Graduated last year. You could be his brother. I'm the first to tell you that?" the guy said, revealing a flawless set of pearly, white teeth.
I smiled back, dazzled by him. I hoped I wasn't blushing. "You're the first to tell me anything. You're the first person I've met here."
"You're kidding. Well, we're playing touch football, could use another player or two," he said. "You comin'?"
"Um, sure," I said. Showering could definitely wait.