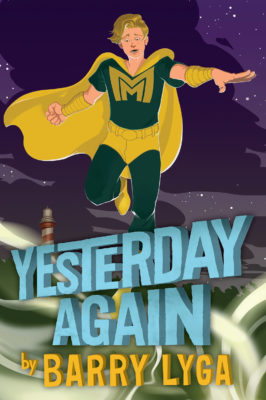 Kyle Camden, a.k.a. the Azure Avenger, unintentional Bouring archvillain, has a foolproof plan to finally prove that Mighty Mike, unintentional town superhero, is an alien. Kyle's going back in time to the night Mike Mighty showed up on Earth and video tape his arrival. Yet he decides to use the time machine just as something evil has been unleashed on Bouring during the Annual Time Capsule Burial. But Kyle can fix it when he's back, right?
Kyle accidentally overshoots his intended destination, landing in 1987, and burns out his time machine. Things get even stranger when he accidentally befriends his dad at age twelve, meets Sheriff Monroe (his archnemesis in present time) as a teenager, and discovers William Lundergaard lurking around. But Lundergaard isn't any younger. How did he end up in 1987 and why? Kyle better figure it out fast. Because if he doesn't get back to the present immediately, well, there might not be a present anymore!
Barry Lyga

Barry Lyga is the author of ARCHVILLAIN and THE MAD MASK, the first two novels of Kyle Camden's adventures. He's also the author of several critically acclaimed YA novels including THE ASTONISHING ADVENTURES OF FANBOY AND GOTH GIRL, as well as its follow-up, GOTH GIRL RISING; BOY TOY; and HERO-TYPE. Barry lives in Brooklyn, New York. When he's not writing he uses his superpowers to fight crime.