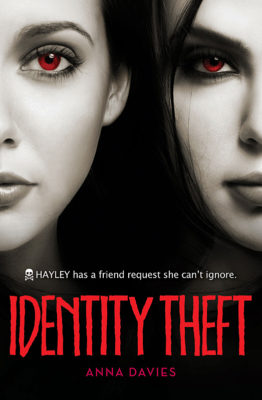 Hayley is going to have the best year ever. After years of careful planning, she's ready to serve as student council president AND editor-in-chief of the newspaper. Ivy League, here she comes!

However, just before student council elections, someone creates a fake facebook profile for Hayley and starts posting inappropriate photos and incriminating updates. It must be the work of a highly skilled Photoshopper, but the attention to detail is scary. The embarrassing photos of "Hayley" in her bathing suit reveal a birthmark on her back--a birth mark Hayley has never shown in public. . . .

The situation escalates until Hayley's mother reveals some shocking information. Hayley isn't an only child: She has a twin sister who was adopted by a different family. And that's not all. Soon, Hayley discovers that her long-lost sister isn't just playing a prank--she's plotting to take over Hayley's life . . . by any means necessary.
Anna Davies

Anna Davies is the author of WRECKED and a Senior Editor at Cosmopolitan Magazine. She lives in Brooklyn.