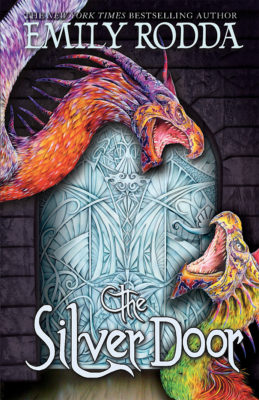 Rye made it through the golden Door and rescued his oldest brother, but his troubles are far from over. The walled city of Weld in which he lives is still under attack by flying beasts called skimmers and Rye must discover who is sending them before it's too late. Also, his second brother, Sholto, is still missing and Rye can feel that he's in terrible danger. Rye must choose one of the three Doors that lead out of Weld and venture into the unknown one more time. Will he save Sholto and Weld . . . or will the silver Door be the end of Rye?

--- - Rye pulled up the hood. Sonia took his arm, and he took Dirk's. They moved to stand before the silver Door.

Rye reached out for the slender handle. The moment his fingers touched it, the Door began to open.

Again he saw a widening strip of blinding light. Again he felt an invisible power drawing him forward.

And again he was pulled off his feet, as the world of the silver Door dragged him in.