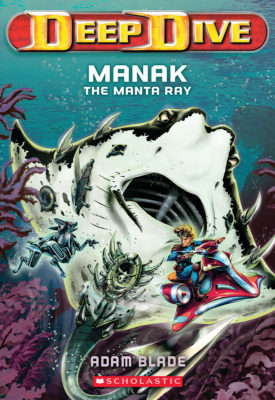 Max is determined to track down the evil Professor even if that means journeying into the deadly Forest of Souls. Lia knows this is a dangerous plan but she will do whatever it takes to help with the search. Max is going to need that kind of friendship when his quest leads him into battle with Manak the Manta Ray. A sting from this Robobeast's tail will paralyze any victim. Can Max defeat Manak and retrieve the third piece of the Skull of Thallos in order to save his father?
Adam Blade

--- - Max caught a movement out of the corner of his eye.
The next instant, he saw an enormous black whip rear out of the darkness ahead. Before any of them had time to move, it hit Tusc'ol in the chest, like a striking snake.
Tusc'ol barely could cry out. He stiffened immediately and stood unmoving, paralyzed by the venom. His face was frozen into a mask of horror.
"Tusc'ol!" Lia cried out.
"It must be Manak!" Max said. He gripped his hyperblade tighter. "Where is he?"