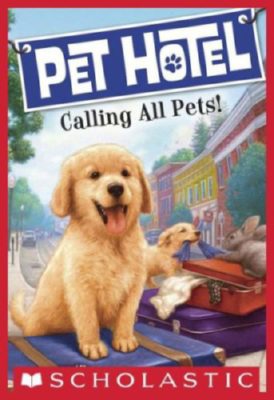 Twins Meg and Charlie are moving into their great-great-aunt's hotel, and they're in for some surprises! The run-down hotel is full of cool old rooms, a rooftop garden, even an elevator. There's also one big problem -- it doesn't have any guests.

But when Meg and Charlie volunteer to look after a neighbor's golden retriever puppy, the fuzzy little furball gives them a great idea. They're going to transform their new home into an amazing hotel . . . for pets!
Kate Finch

Kate Finch lives in a regular house with regular pets -- but maybe she'll start a pet hotel of her own one day! PET HOTEL is her first series.

\tAs they walked along Gazebo Square, Charlie checked the signs on the buildings.
\t\"Diamond Hotel!\" he murmured. \"It sounds like somewhere movie stars would stay.\"
\t\"It might be like a palace!\" Meg exclaimed.
\tMom had stopped in front of a tall brownstone. It was covered in crumbly plaster that might once have been brown, but now looked almost black. Over the battered door was a wooden sign with iron letters that read \"DIAMOND HOTEL.\"
\tThe twins' mouths dropped open.
\t\"It's called that because 'Diamond' is Saffron's last name,\" Mom explained, raising her voice as one of the workmen at the archway turned on a big drill. The vibrations made the ground rumble. Bits of plaster fell off the front of Diamond Hotel and showered down on the twins' heads.
\tPlunk! The hotel sign landed at their feet.
\tMeg and Charlie looked at each other. What would Diamond Hotel be like inside?"