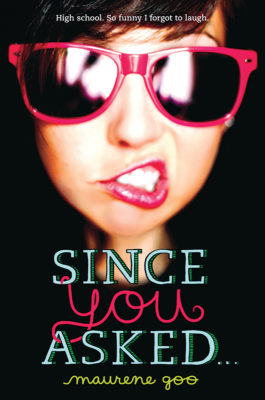 Fifteen-year-old Holly Kim is the copyeditor for her high school's newspaper. When she accidentally submits an article that rips everyone to shreds, she gets her own column and rants her way through the school year. Can she survive homecoming, mean-girl cliques, jocks, secret admirers, Valentine's Day, and other high school embarrassments, all while struggling to balance her family's traditional Korean values?
In this hilarious debut, Maurene Goo takes a fresh look at trying to fit in without conforming to what's considered "normal" in high school and how to manage parental expectations without losing one's individuality...or being driven insane.
Maurene Goo

Maurene Goo was born and raised in Los Angeles, California, where she navigated her childhood by practicing extreme bossy Lord-dom over her many cousins. She studied communication at the University of California, San Diego, and received a master's degree in publishing and writing at Emerson College. She lives in Los Angeles with her husband and a very old cat. You can visit her online at www.maurenegoo.com.

“Holly, we've got a huge problem. I just got the first batch of the new issue in--”
\t“Oh, man, did I miss a typo?” I asked, dismayed.
\t“No, you did not miss a typo! You published a column!”
\t“Huh? What are you talking about?”
\t“I'm talking about Stephanie's column that you replaced with your own. You are in such huge trouble, I can't even tell you!”
\tMy heart skipped a beat and I felt light-headed. There was no way . . .
\t“There's been a mistake. That wasn't a real article--I was just playing around.”
\t“Just playing around?! Good job, genius! It's already been sent to all the homerooms for distribution!”
\tI slowly slid off my bike. “Oh, crap!”
\t“YES! 'Oh, crap' is RIGHT!”
\tMy life flashed before my eyes. I envisioned my immediate expulsion. I saw my parents breaking down into hysterics. My mother would be wearing one of those white headbands tied around her head--what Koreans wear at funerals when they're throwing themselves onto the floor in front of a picture of the deceased--screaming and crying over my demise. Because really, at that moment, I would be dead to her."