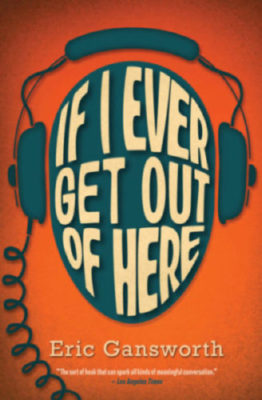 If I Ever Get Out of Here

Lewis "Shoe" Blake is used to the joys and difficulties of life on the Tuscarora Indian reservation in 1975: the joking, the Fireball games, the snow blowing through his roof. What he's not used to is white people being nice to him -- people like George Haddonfield, whose family recently moved to town with the Air Force. As the boys connect through their mutual passion for music, especially the Beatles, Lewis has to lie more and more to hide the reality of his family's poverty from George. He also has to deal with the vicious Evan Reininger, who makes Lewis the special target of his wrath. But when everyone else is on Evan's side, how can he be defeated? And if George finds out the truth about Lewis's home -- will he still be his friend?
Eric Gansworth

Eric Gansworth is Lowery Writer-in-Residence and Professor of English at Canisius College in Buffalo, New York, and was recently NEH Distinguished Visiting Professor at Colgate University. An enrolled Onondaga, he was born and raised at the Tuscarora Indian Nation, just outside Niagara Falls, New York. His debut novel for young readers, If I Ever Get Out of Here, was a YALSA Best Fiction for Young Adults pick and an American Indian Library Association Young Adult Honor selection, and he is the author of numerous acclaimed books for adults. Eric is also a visual artist, generally incorporating paintings as integral elements into his written work. His work has been widely shown and anthologized and has appeared in Iroquois Art: Power and History, The Kenyon Review, and Shenandoah, among other places, and he was recently selected for inclusion in Lit City, a Just Buffalo Literary Center public arts project celebrating Buffalo's literary legacy. Please visit his website at ericgansworth.com.

Evan landed on my back and began whaling on my face and head. My quickest instinct was to protect my glasses. I was wearing a welfare pair and we would in no way have the cash to get them fixed if they were broken. Once I had my glasses in hand, I spun backward and slammed us against the lockers. This was hard enough to drop Evan, but not hard enough to get him to reconsider his decision to target me.

"Truck!" he yelled, hitting me more rapidly. "This little freak is actually fighting back! What's he thinking?"

"Better teach him a good one, Evan," the helpful Truck said. "Come on, they announced that we got to go back to homeroom."

Evan delivered one last kick to my butt as I put my glasses on. "Yeah, summer's almost here, but we got a whole long year ahead of us for that lesson," Evan said. "Can you believe it? Fighting back?"