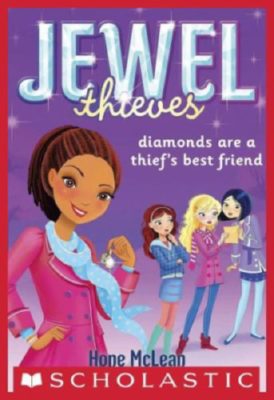 Still smarting after their last run-in with the Rivals, the Jewels focus on their upcoming trip to the Big Apple. But the girls can't stop thinking about the cryptic letter they found, describing not one, but four precious gems that now need their protection!

Even more confusing, the Jewels start receiving anonymous notes, one of which claims the Rivals will try to steal a diamond during their trip to New York City! But which one is it? Finding the right diamond in New York is like looking for a needle in a haystack.

The Jewels get to work, using all their expertise to unravel the mystery of the secret letter and outsmart the Rivals, as a furious game of cat and mouse ensues across New York City. Will the Rivals rule again? Or can the Jewels conquer in quiz bowl AND stop a crime?
Hope McLean

Hope McLean loved reading mysteries when she was a kid, and often pretended she was on an adventure to uncover secret treasures. She also loved playing with her grandmother's jewelry. The Jewel Thieves series brings two of her favorite childhood activities to life.