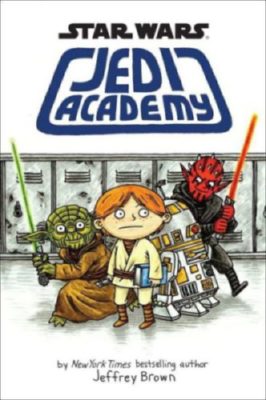 This incredible, original story captures all of the humor, awkwardness, fun, and frustrations of middle school--all told through one boy's comics, journal entries, letters, doodles, and newspaper clippings. The setting? A galaxy far, far away...

Roan's one dream is to leave home and attend Pilot Academy like his older brother, father, and grandfather. But just as Roan is mysteriously denied entrance to Pilot School, he is invited to attend Jedi Academy--a school that he didn't apply to and only recruits children when they are just a few years old. That is, until now...

This inventive novel follows Roan's first year at Jedi Academy where, under the tutelage of Master Yoda, he learns that he possesses more strength and potential than he could have ever dreamed. Oh, and he learns other important things too--like how to make a baking soda volcano, fence with a lightsaber, slow dance with a girl, and lift boulders with the Force.
Jeffrey Brown

Jeffrey Brown is an Eisner Award winner and the New York Times bestselling author-illustrator of Darth Vader and Son, and Vader's Little Princess, both imagining what it would have been like if Darth Vader had raised a young Luke and Leia. Jeffrey has created dozens of graphic memoirs, humorous parodies, and cat books. He lives in Chicago with his wife, Jennifer, and his two sons.