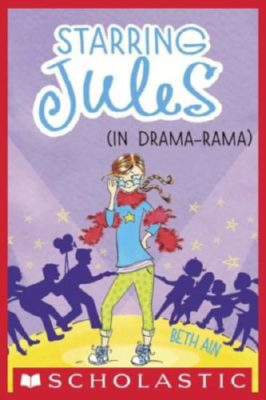 Things I Didn't Know About Being on TV
by Jules Bloom

1. Shooting a pilot does not mean what you think it means.
2. On TV, people live in mansions and have drivers!
3. You get to completely change who you are, which everyone but me thinks I can do.
4. You might have to miss the moving up play at school, which no one but me cares about.

When Jules lands a role on a new TV show, she gets stuck choosing between taking part in her class moving up ceremony at school and shooting a sitcom. And that's only half the drama!

With a quiet best friend who won't ever hoot and holler and an ex-best friend who may be moving to the burbs, Jules's insides are all mixed-up. She'll need a little bit of nerve and a whole lot of pizzazz if she wants to make it through the last month of second grade without turning into a drama queen!
Beth Ain

I wake up with a giant pain in my stomach. \"Mommy!\" I yell, which does not bring my mom, but it does bring my brother.
\t\"What, Jules?\" he says with his hands asking the question, like a grown-up. Sometimes I think Big Henry is more like a parent than a little boy. \"Tell Mommy I have a Charlotte-ache,\" I say.
\tBig Henry leaves and I pull the covers over my head and wait.
\t\"A Charlotte-ache?\" my mom says, standing over my head. She has not yet pulled the covers off of me, and I know it's coming. I nod.
\t\"So, we're talking about a stomachache, right?\" she asks.
\tI nod again.
\t\"A stomachache because you have to go to school and tell Charlotte that you are not filming your part in the movie today?\"
\tI nod again and I can't believe she hasn't pulled the covers off yet. I feel like I might suffocate. I picture the ocean in Florida and getting sucked away by the undertow and I start to panic. I sit straight up and throw the covers off of me. \"Why didn't you pull off my covers? I WAS DROWNING!\" I say in a very loud voice, louder than my mother is comfortable with.
\t\"Excuse me?\" she says in her about-to-freak-out voice.
\tI start to cry. \"She is going to make fun of me,\" I say. My ex-best friend, Charlotte (Stinkytown) Pinkerton, is just waiting for me to fail at being an actor. \"And then she is going to tell me that she knows Hollywood and that this means there will be no movie and that I will never be a movie star and that at least it was nice while it lasted.\""