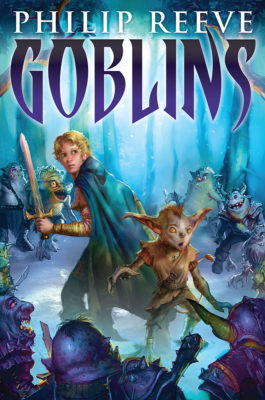 Welcome to a wild world of magical creatures and heroic adventure!

The squabbling goblins that live in the great towers of Clovenstone spend their time fighting and looting. Only clever young Skarper (who happens to be in exile) understands that dark magic created by a vanquished sorcerer is rising again. With the help of a wannabe-hero, a middle-aged princess, and a few bumbling wizards, Skarper must fight to save their world.

--- - The highest of the seven towers of Clovenstone is called the Blackspike. Although it is dwarfed by the great mass of the Keep behind it, it is still taller than any tower in the lands of men. From its snow-flecked battlements to the ground at the crag's foot is a very long drop indeed . . .
And that was bad news for Skarper, because he had just been catapulted off the top of it.
“Aaaaaaah!” he screamed, rising up, up, up, pausinga moment, flailing for handholds on the empty air, and then beginning his long fall. “Aaaaaaaaa . . .” But after the first thousand feet or so he realized that he wasjust going “ . . . aaaaaaaaaaaa . . .” from force of habit, so he stopped, and from then on the only sounds were the whooshing of the cold air past his ears and the occasional cottony rustle as a cloud shot by.

Of course it's not so much the falling that bothers me, thought Skarper, as the ivied stones and mean little windows of the Blackspike rushed past him. It's the hitting the ground that's the trouble . . .
Below him– now that he had got used to the feeling that the wind was pushing its thumbs into his eyes– he could see plump white clouds dotting the middle air like sheep. Below them the bleak buttresses of Meneth Eskern spread out like the fingers of a splayed stone hand, with ruined buildings clustering between them. Weeds and little trees had rooted themselves in the rotting roofs and between the flagstones of the silent streets, and as the land sloped downward toward the Outer Wall, five miles away, the trees grew thicker and thicker, forming a dense wood, from whose canopy old bastions and outbuildings poked up like lonely islands.
This was Skarper's world, and as he looked down upon it he was interested to notice several details that Stenoryon's Mappe of All Clovenstone had got wrong. But not that interested, because the details were rushing toward him at great speed, and long before he could tell anyone of his discoveries he was going to be splattered all over them like a careless delivery of raspberry jam.