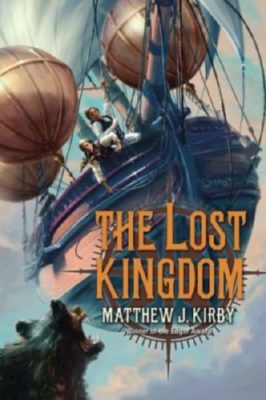 In this extraordinary adventure story, Billy Bartram, his father, and a secret society of philosophers and scientists venture into the American wilderness in search of the lost people of the Welsh Prince Madoc, seeking aid in the coming war against the French. Traveling in a flying airship, the members of the expedition find their lives frequently endangered in the untamed American West by terrifying creatures, a party of French soldiers hot on their trail, and the constant threat of traitors and spies. Billy will face hazards greater than he can ever imagine as, together with his father, he gets caught up in the fight for the biggest prize of all: America.
THE LOST KINGDOM is an epic journey filled with marvelous exploits, courage and intrigue, and a bold reimagining of a mythical America. Matthew J. Kirby brings his signature storytelling prowess and superb craft to this astonishing story of fathers and sons, the beginnings of a nation, and wonder-filled adventure.

--- - From THE LOST KINGDOM
The bear-wolf stood on its hind legs, looked up at us, and slammed both of its front paws against the ship's hull with its full weight. The de Terzi jolted, and I felt the reverberation through my boots.
"We don't have two minutes!" my father shouted. "That thing is strong enough to crack the hull!"
The bear-wolf heaved itself against the ship a second time, and I heard the sound of wood splintering.
"I'm working as fast as I can!" Mr. Faries shouted. "Someone take the helm!"
Mr. Kinnersley raced to the controls. "I'll do it!"
"Wait for my mark!" Mr. Faries said.
The ship thundered with a third blow from the bear-wolf. The animal roared, and something in it sounded triumphant. Almost as if it had realized it was breaking through.
"Mr. Faries?" my father said.
"Now!" Mr. Faries said, letting a rope lose in his harness. I shouted in alarm as he plummeted toward the deck, but he pulled the rope tight just as he was about to hit and stopped his fall.
Mr. Kinnersley threw a lever, and the de Terzi eased upward out of the bear-wolf's reach. We all looked over the edge, watching the animal grow smaller as our ship moved slowly down the river, and I began to feel safe enough to relax a little. But the bear-wolf pursued us, never taking its eyes from us as it stalked down the riverbank, parallel with the ship.