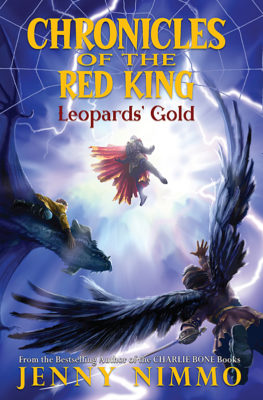 Series: Chronicles of the Red King

Many years have passed since the end of Book Two, and we now meet King Timoken's children, who, with their own magical endowments, stand divided between the forces of good and bad. Young Petrello and Tolomeo must fight to protect their siblings and their kingdom as an evil force invades the once-peaceful Red Castle. Readers will embark on one last adventure in the thrilling finale to Jenny Nimmo's extraordinary Chronicles of the Red King trilogy.

--- - From LEOPARDS' GOLD
A savage battle began. Creatures were wounded. Soldiers died. Queen Berenice wielded her sword so fast and so nimbly, Osbern couldn't get near her. Protected by his wolves Amadis sliced and slashed, working his way closer and closer to the owner of Melyntha. It had become so dark Sir Osbern could only be recognized by his huge bulk.
Why has day become night, wondered Amadis. Have we been fighting so long?
How could he know that, high above the forest, his brothers needed his help?
The demons crowding about the winged boy and the dragon, all at once began to leave the sky. Where they went, the boys couldn't tell. The hovering creatures seemed to vanish into passing clouds of vapor.
Tolly flew to Enid's side. "Have we won a battle?" he asked his brother.
"Has Tumi reached the king?" was Petrello's answer.
Their only thought now was to land somewhere safe, but all they could see beneath the clouded sky was a vast expanse of gray-green water.
In the distance, Petrello saw a darkness, greater than the clouds, gather itself into a dense black shape. It was as if the forest canopy had lifted and become a whirling mass of leaves.
And then it came at them, its black sleeves flapping, its face more terrible than their darkest nightmares.